Why it is hard to lose weight? 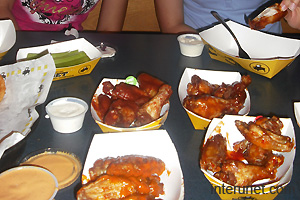 Weight loss is a huge problem for many people. It is commonly not only your appearance issue, but your health as well. Some people blame metabolism or age when they start to gain more while others try to be realistic. They change their life style by reducing the amount of food they consume and do physical activities. On one hand, it is only partially true that with years people are prone to fat accumulation. However, commonly with aging many individuals become less active which might lead to depositing extra unwanted pounds.

Why people eat more food than they need

People may consume more food if they:

Usually it is better to eat small portions few times a day than fever but huge ones consuming enormous amounts of food. This is mainly because if you get too hungry you will have harder time to watch what you are eating. Starving people usually cannot watch what they are eating until their hunger will be entirely satisfied. The problem with that is those individuals might intake fare fast from the beginning of their meals consuming excessive food before their brains tell them that they are not hungry anymore.

Depressed or stressed out

Some individuals may try to calm down by trying to eat more often than they should. In addition, they might try to kill their sadness with chocolate or other sweets.

Even though it might sound strange, but some people simply just full their stomaches because they are bored. They lay or sit in front of the TV and often times don’t even realize how much of food was consumed.

Eating because someone else chewing

It is more likely that you intake more fare when you eat with someone than alone. If a person sees that someone chewing it might make him feel hungry as well.

Some women after pregnancy still keep eating huge portions of food as they used to during the pregnancy even though not everyone plan to breastfeed their children.

Why weight goes up and down depending on season

Usually people are more or less active in different seasons. For example, in North America in a warm season such as from about middle of spring and to mid of fall people are more active and whether lose or at least do not gain much weight in this period. On the other hand, the rest of the year they are less active and may start to gain pounds again. Other factor to consider is that our body also gets ready for the winter time and accumulates some fat.

Does weight gain depend on the profession

Usually a certain profession does not affect much your weight gain or loss. It rather depends on personality than on a type of job you choose. For instance, some computer programmers sit in front of computer screens all day long and they remain slim. In contrast, some mailmen can have weight loss problems despite the fact that their activity level is high because they are required to walk a lot.