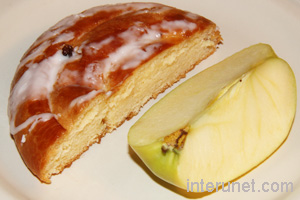 Unfortunately it is easier to name the food and drinks that won’t cause accumulation of fat than those which will. Therefore, almost everything that we eat can be the reason why people gain weight. Of course, sweats might be one of the largest fat causing groups of fare. In addition, breads and sweat beverages are also among the foods and liquids that you need to be careful with. The other thing to keep in mind is that sometimes not the kind of starch itself might make you fat, but the way it was cooked and which other ingredients were added to the dish.

Which food won’t make you fat?

Some people say that certain foods cannot make you fat. However, think twice before trust to such statements. Even a watermelon can cause some weight gain because it has natural sugars in it. Of course, you probably won’t obtain as much as you would if you intake other higher caloried products, but still there is usually no guaranty that if you make yourself eat just certain types of food you will definitely melt your excessive flab. On the other hand, if you choose to consume just few types of fare then the big chances are that you will get tired of eating the same meals for a long time. The two things will probably happen whether you start to consume less or you might quit such dieting. Therefore, it is better do not be that concern what might not make you fat, but how to have varied and balanced diet in right portions in order to feel energetic and stay healthy.

Usually even high fat food, such as bread, milk, meat, sweats won’t hurt your body shape if you closely monitor amounts of its intake. Therefore, it is generally doesn’t really matter whether you drink whole milk or reduce fat dairy. On the other hand, if you frequently glut then it won’t matter much whether it is fat free or not. You will probably gain lots of weight and in a relatively short period of time. It is almost like for a person who has diabetes doesn’t necessarily harmful to have sugar treats if in small and proper amounts. However, this diabetic individual might be hurt more if he eats two pieces of a sugar free cake where the dose of carbohydrates is more than allowed or wise.

Is starving diet are helpful for losing weight?

The starving diets usually works and people can get rid of pounds in relatively short period of time. However, those kinds of extremes better to do under someone’s supervision, such as a certified dietitian or nutritionist. You need help from a person who could advise you not only how to lose weight fast, but how to stay healthy as well. You should understand that your cells and organs cannot properly function without enough but not exessive consumption of vitamins and minerals. Remember that unwise dieting might cause serious health problems and after that you will still get back your pounds about as fast as they were lost. The scary part about it might be that you can gain even more.