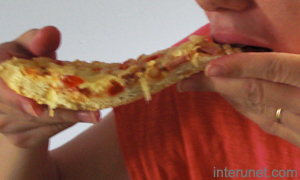 People need food in order to have energy and exist as a human being. If a person will not eat enough he/she will feel tired, irritable, and drowsy. In addition, some other signs of not eating properly relate to having constant fatigue, stomachache and headaches. Some people just want to be slim no matter what. They even sometimes damage their health by not consuming enough fare. If your organism won’t get enough vitamins and microelements you might have some problems with your gums, teeth, skin, stomach, etc…

On the other hand, people might consume more food that they should. They do it normally because they just get used to glut. Those people cannot stop eating less and exercise more because they don’t believe that they will be able to lose that extra weight some day. Those people might not have any good example of a family member who lost lots of pounds and which they could follow. However, even if they had a person that they know who did lose weight and tell them how he/she did it, it is not necessary mean that his/her way will work for everyone. In addition, there are so many advertisements about losing weight and everything that people don’t trust and rely on them much. Their commercial examples seem like unrealistic and it is hard to believe that an individual can get rid of many pounds for relatively short period of time.

If a kid from childhood adopts his/her parents bad eating habits then later in life it is a big possibility that he/she will have problems with weight, with heart and blood pressure. Therefore, it is very important to know yourself and how your body works. Your stomach has an ability to stretch and shrink. Therefore, if you eat little by little more and more food, then your organism will demand bigger amounts and you even will not realize and notice that. In contrast, if you start to reduce your portions very slowly but persistently then your stomach will react on it also by shrinking a little bit.

Your metabolism plays the biggest role in your decision on how much you should intake in order to make optimal choice that won’t let you feel hungry or overeat. Unfortunately, most people have better metabolism when they young and then with some years it become not that good later in life. Therefore, you should understand it and adjust accordingly. In addition, with years adults start to move less compare to as they used to do. This happens because of many reasons, such as lack of time, motivation, stress, illness, or gaining some bad habits.

Some people just don’t know that they can get energy not only from food and/or drinks. For instance, to have some good night sleep will help your body to generate energy level for whole day. In addition, you can keep up you energy level by doing pleasant and relaxing activity, such as reading your favorite book, playing with your kids or pets (if any), and speak to your friend, mother, or just family member.