Should I buy an electric car? Electric vehicles are not something relatively new. They were used since 19th century. It is no doubt conventional cars are much more convenient, practical, and have higher performance, but it took more than a century to improve vehicles to the condition they are now. Hundred years ago no one care about pollution, greenhouse gas emissions or oil supply. But with a growing population and simply destroying the planet with not a wise use of energy resources we might soon face a much bigger problem than just simple increase in oil prices. Tesla motors offer higher quality fully electric vehicles for the prices of luxury conventional vehicles, and simply playing with a numbers many drivers might think it is better to get a reliable 6.0L BMW 7 Series instead of electric Tesla, and they might be right for now, but future is all about progress an moving on.
While in the U.S. the cost of gasoline much lower in comparison with other European countries, it is still on a rise and in case of a significant increase electric vehicles might be a good alternative. But still there are more questions than answers. Electric vehicles become more and more popular in many countries around the Europe. Very often it is not because there are many advantages of such cars including cost, but due to countries’ government supports their development.

What is cheaper to drive an electric car or vehicle with a gasoline engine?

The initial cost of a fully electric car is often higher; resale value might be not even comparable to conventional vehicle because not many drivers might even consider buying 6 - 7 years old an electric car while most manufacturers estimate the battery life is about 10 years. But paying less in taxes, getting a free parking or other benefits makes electric vehicles very attractive. Plus, astronomically high cost of gasoline makings drivers to find a way for alternatives. One of the top oil producer and exporter – Norway has gasoline prices more than twice higher than in US, but instead of caring about drivers who own conventional vehicles, they look in the future and support owners of electric cars.

How electricity is generated

While many might think getting an electric car is good because it is pollution free and 100% green option, it is just partially true. If the electricity for charging your car generated by wind, sun or other 100% renewable sources of energy than it is true and it might be a good way not to harm our planet more than it already is. But if electricity will still be produced by burning oil or coal it will not make a big difference anyway. 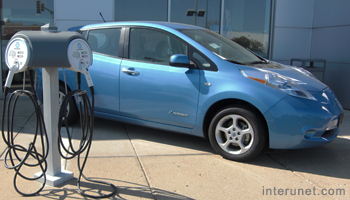 The most important factor is to understand it is not about the prices. Driving an electric car 20 mi to work and back home is one thing, but what about longer distances - going 600 – 800 mi on a family vacation and stop every 70 – 150 mi for at least half an hour to charge the battery not the best option. In Europe you might be fine with a public transportation – in US you need a car. In Europe compact vehicles are the most popular – in US pickup trucks Ford F-Series and Chevrolet Silverado are on top of best-selling vehicles, no mention dozens models of full and mid-size SUVs.
It is no doubt only government support and the whole country infrastructure has to be suitable for such cars. But US government tax credits while purchasing an electric vehicle is an indication of moving on. Other important thing is that car itself has to be suitable for American lifestyle. It is not only about the car size, but about driving distances. While many small European countries have a few hundreds kilometers of highways total - in US there are thousands of miles interstate highways and people often travel every day the same distance you can cross a whole country in Europe. The whole point electric car has to be practical. The car cannot slow down your commutes, vacation or just travel because you have to stop often and wait for a while to charge the battery.

Should I buy an electric vehicle?

In US there are some vehicles you might consider while shopping for a fully electric car:
Nissan Leaf - $35,200 MSRP (manufacturer suggested retail price)
Mitsubishi i-MiEV - $29,125
Ford Focus Electric - $39,200
Tesla – from $57,400
Coda - $37,250
There is also some plug - in hybrids including Chevrolet Volt, Toyota Prius plug – in Hybrid, and Fisker Karma, but they are not fully electric vehicles.
As for now electric cars cannot be considered as better or worth, cheaper or expensive. It is just a different type of a vehicle. All electric cars are compact and if you need a larger 7 passenger minivan or pickup truck you cannot find anything electric to compare with. Cost, availability and supply of traditional fuel will impact the development of electric cars.

For now an electric car might be good for a short distances or city driving. From the simple car prices comparison it might be cheaper to get the cheapest new car spending every day on gas and sell it after 10 years for 25% of its original price. But it is only with current fuel prices in the US.

Ones all roads will be equipped with quick-charging electric stations and the gas price will rise it might be better to have an electric vehicle. But still it is a different type of a car and using renewable energy such as wind or solar power for producing electricity and improving electrical vehicles might be a good way to go.